Smart Poles are equipped with either an electronic charging station and a sensor to identify whether parking spaces are vacant or full, an air-quality sensor as well as one that can be used as an emergency contact for stressed citizens, or a WLAN router which provides access to high-speed internet. The Latest Smart Poles are also equipped with a big screen that displays the air quality information and provides drivers with information about available parking spaces, and general information for the public.

Every one of the Smart Pole configurations has been carefully selected to bring greater digitalization, sustainability, and mobility to our streets. For instance, with the growing amount of countries seeking to end fossil-fuelled car sales, for now, however, the Smart Pole’s sensor for air quality is a crucial element in alerting vulnerable citizens about traffic pollution. 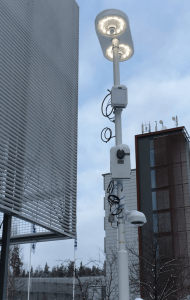 Smart poles, including BrightSites, are powered by small-cell base stations located inside the pole. Since they operate within the city’s street lighting infrastructure smart poles enable city planners to increase the urban network’s capacity and coverage at their speed without causing disruption.